My posts are going to be a tiny bit backlogged for the next few days because I’ve been insanely busy, but it should work out fine because I’ll be travelling all day Tuesday so I’ll schedule a post then and we’ll be caught up by the time I get home.

I went for one last visit to Winchester Cathedral, and saw it like I’ve never seen it before.

The Cathedral is Winchester’s crown jewel. It was first built in 1093. Let’s let that sink in for a while. This cathedral is one thousand years old. Holy shit.

It’s got a mix of Norman/Roman architecture (the Normans sort of stole it from the Romans, so it’s Roman design but Norman built, if I remember correctly) and Perpendicular Gothic (which is one of the most beautiful styles of architecture in my opinion). It also has some crazy history, which sort of comes with being a thousand years old.

I’ve visited the cathedral several times before, but this time I got a ticket for a tower tour, which is a first for me. 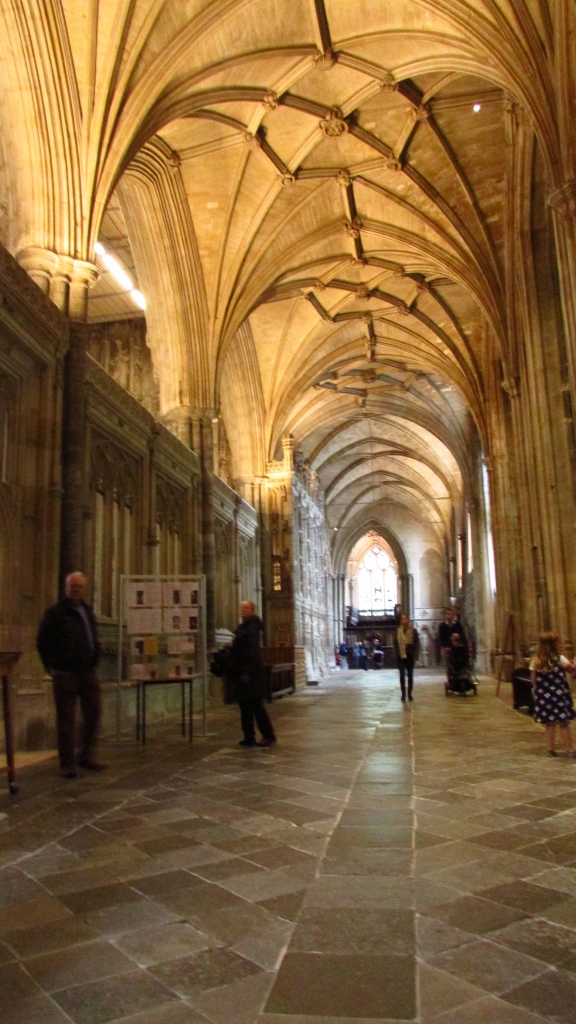 The tour started with our small group (2 guides, 2 other tourists, and me) going through an inconspicuous wooden door which opened immediately to narrow spiral stairs. The tour is kind of like a ride at Disneyland. Not recommended for anyone with any health problems or pregnant women and you have to be able to fit into tight spaces. Also a bad idea for anyone with claustrophobia or a fear of heights, but no worries: I took pictures!

We emerged from the narrow spiral stairs onto this side of the cathedral, along the top edge near the front. 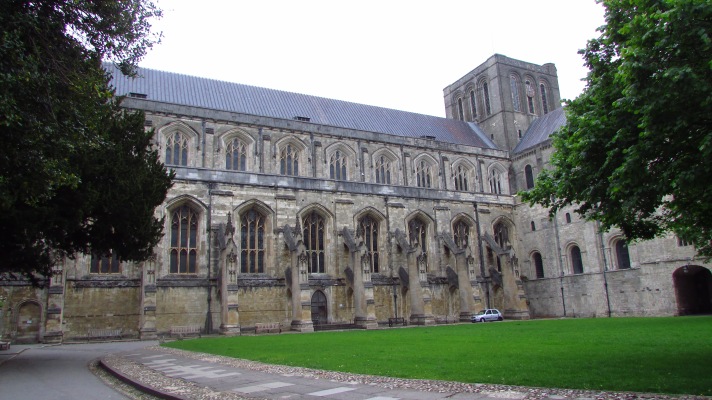 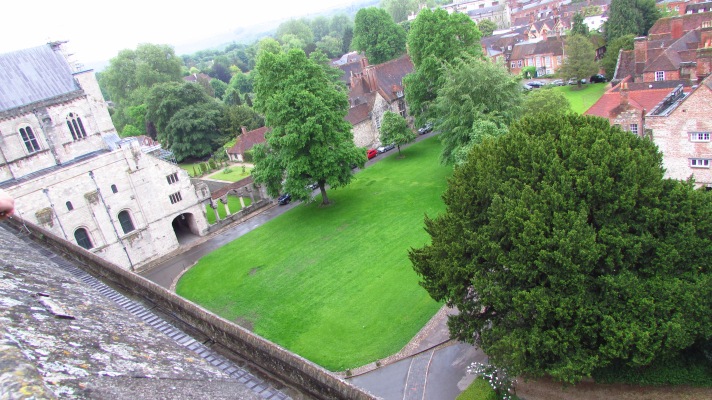 The weather was spitting on us, but nothing could ruin the view. 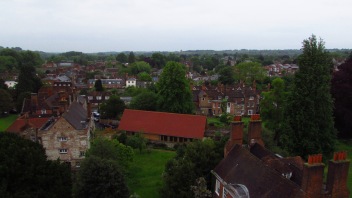 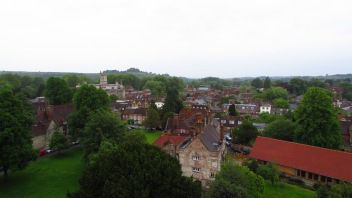 From there we went into the roof. I guess it’s like the cathedral’s attic?

We walked along a narrow bridge made of slightly-flimsy-but-not-enough-to-worry wood down what would be most of the length of the cathedral and came into the room where the bell ringers ring the bells by pulling ropes from the ceiling. The cathedral has something like 17 bells which is the most of any cathedral in England, I think. The guides had a lot of cool info about the bells and stories about people involved in the cathedral’s history. It was very interesting. 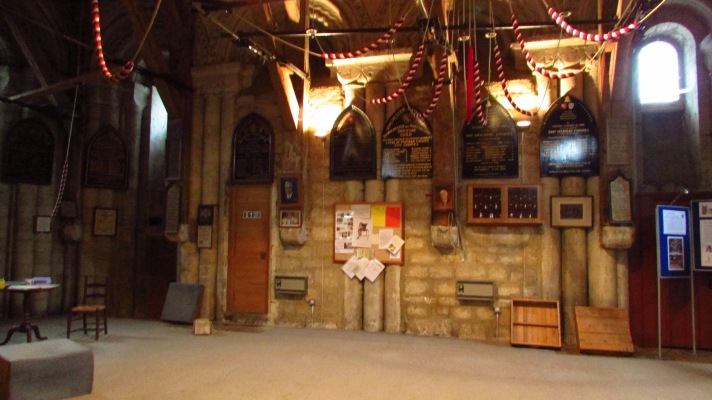 And from there we went up an even narrower and steeper spiral staircase. I’m not even kidding, there was barely enough room for my foot on each step and there wasn’t enough room to lift one elbow more than 45º. It was insane, and to be honest, one of the coolest staircases I’ve ever used.

We stopped halfway to see the bells before continuing up the stairs.

The entire journey was all worth it when we finally reached the top. 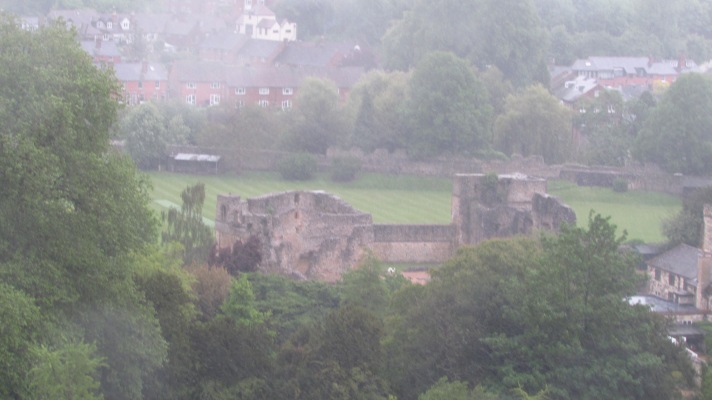 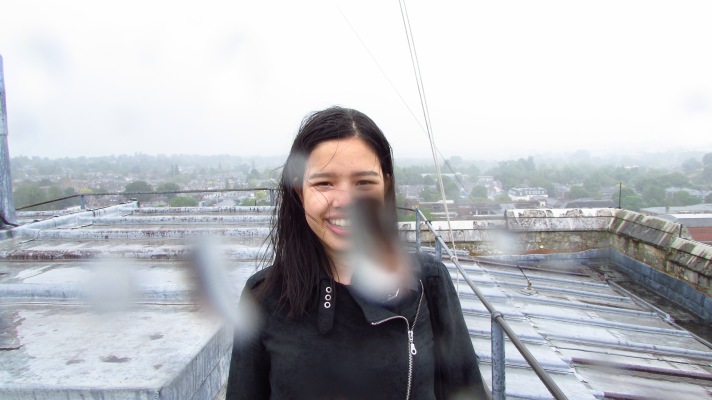 All the way down the tiny staircase, through the bell-ringing room, down the attic path. We spent time in each place again and the tour guide told us more the entire time. As a treat since the weather was so bad, we went out on the roof on the other side of the cathedral, too. 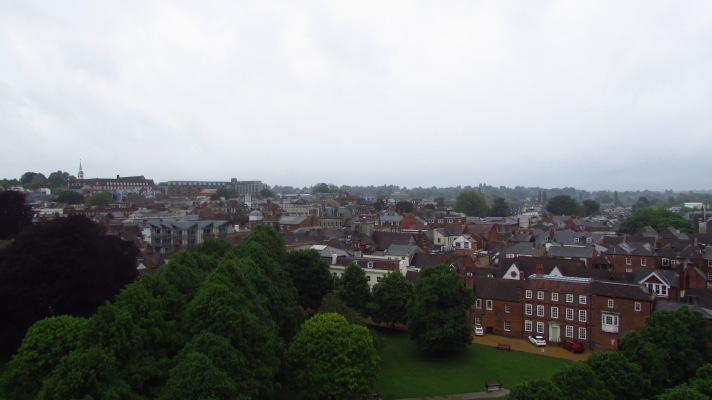 I also got some pics of some of the stonework in the attic. There was some really old graffiti on the stone around the attic window.

After the tour I got a cool certificate styled with artistry from the Winchester Bible. I actually got to look at the actual bible afterwards but there were no photos allowed.

After the tour I went exploring a bit and looked around the beautiful place for one last time. 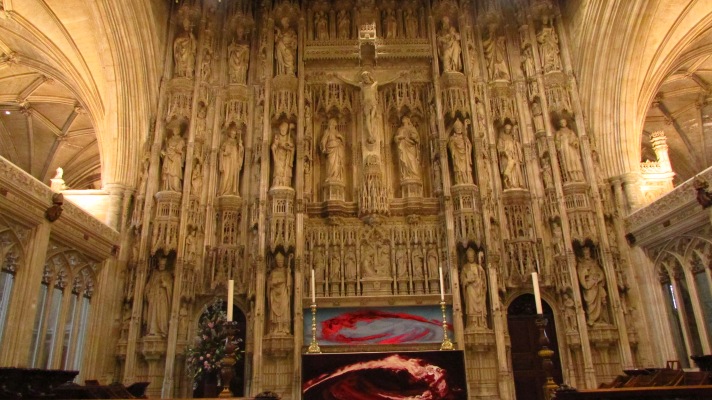 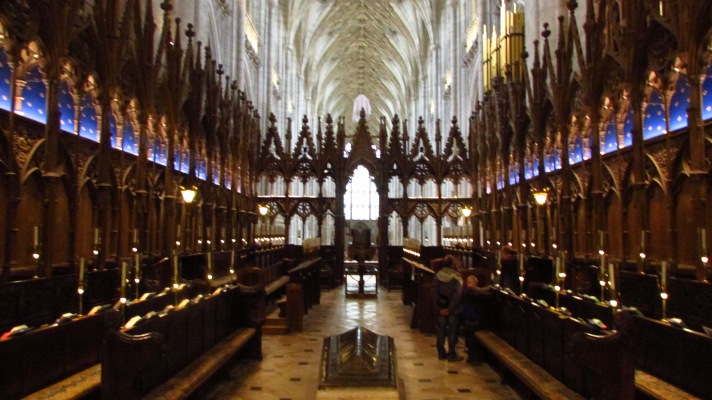 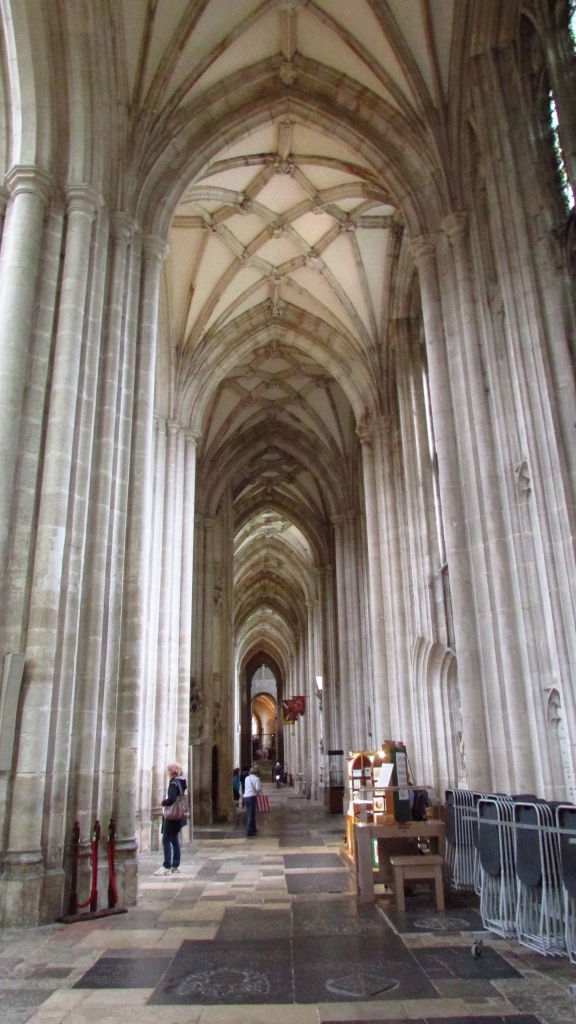 I even went down to the crypt. From the top of the tower to the bowels of the building.

And that was it. I should sleep now, I’m off to London tomorrow.