Well that didn’t exactly go as planned. This post was supposed to go up yesterday, but the internet at my hostel was playing up so here we are, days behind schedule. No worries, we’ll catch up soon I’m sure.

Wednesday and Thursday I had a workshop thing until 4:30 both days, but I was planning to leave Winchester on Friday morning and there was still one thing left for me to do. My quest was to go to the top of the locally famous St. Catherine’s Hill.

After class on Wednesday, I had a couple of errands to run, and afterward I went looking for the hill. I first passed Winchester College (which I wrote about visiting here) and took a pic since I forgot my camera the day I went.

I didn’t really plan out my trip. I figured, it’s St. Catherine’s Hill. It shouldn’t be difficult to find. After all, I’ve seen it from all sorts of places in town and on campus, ever since my first morning three years ago when I realized I could see it from my dorm room.

I knew if I followed the river loosely south, I’d get there eventually, so I tried that. 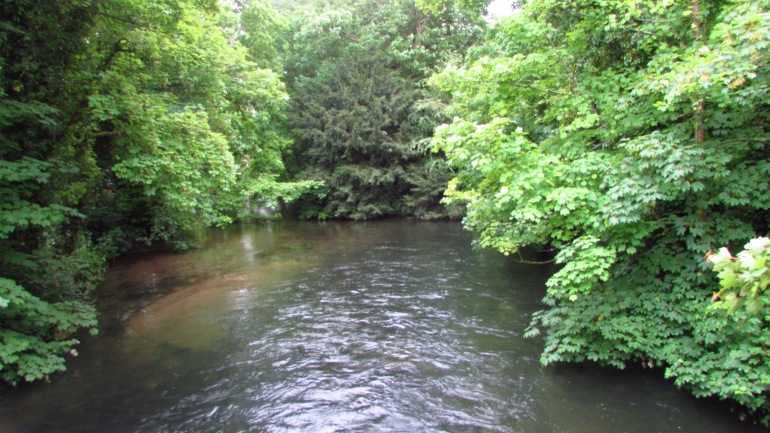 But I also kept heading uphill, and there were a lot of houses around so it was all really residential and it didn’t feel like I was going to a touristy park. I thought I was going the wrong way, but then I saw a sign! 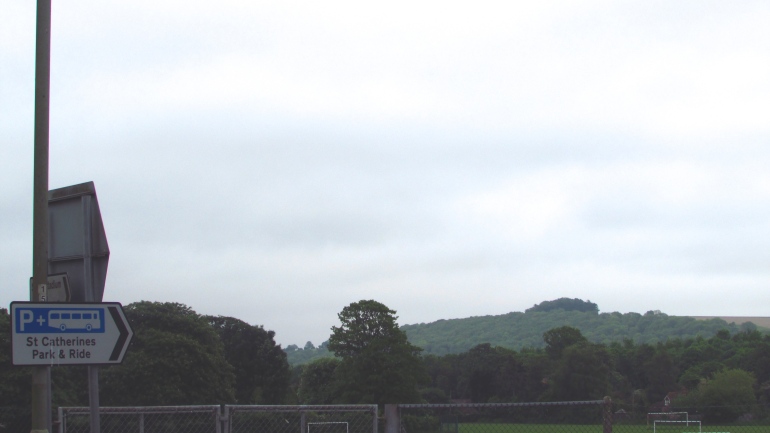 St. Catherine’s! And maybe that hill in the background was where I was headed!

I walked along the road towards it but soon realized I was well out of town and heading towards Southampton, which wasn’t right. I stopped for a drink at a gas station and collected my thoughts, and decided I was walking towards the wrong hill. Winchester is surrounded by hills, and covers a few, too, so finding a specific one isn’t as easy as I thought it would be.

I tried a new direction and went through a park, which was eerily empty and full of crows. I decided that way was wrong, too. It looked ready to rain and I forgot my umbrella, so I headed back towards town. 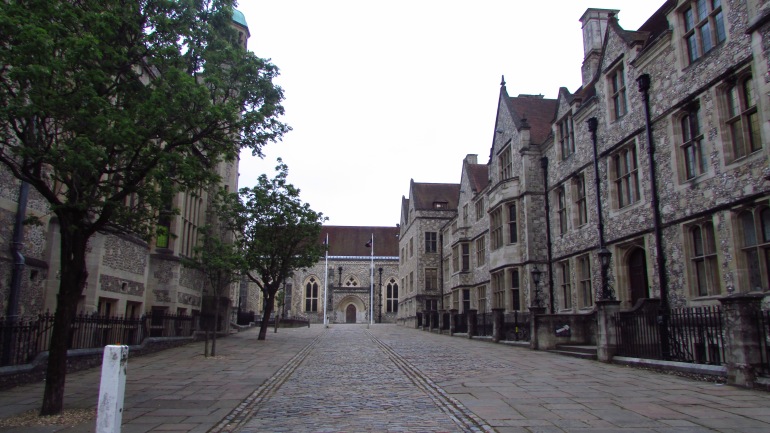 I was never lost, I always knew exactly where I was and how to get back, but I lost St. Catherine’s Hill. Not many Winchester residents can say that.

Thursday evening was my last chance. When I left for class that morning, I thought it might rain again, but after class it was sunny! It was like Winchester was saying, “Fine. Here’s some sun so you don’t lose the freakin’ hill again, but only because it’s your last day.”

So I followed the path around the Cathedral, past the college, and down the river again, but this time I kept closer to the river until I reached a fenced area that looked like a country club. It was kind of intimidating, and it didn’t help that I had passed some of Winchester’s most expensive homes on the way (or so it seemed). But alas! Another sign!

I followed the footpath up the hill to find…

a parking lot. So I came back, entered the gated area and followed the paved path. It felt less adventurous, but for once it was the right way.

AND AT THE END OF THE PATH I SAW A SIGN THAT WAS ACTUALLY HELPFUL!!! 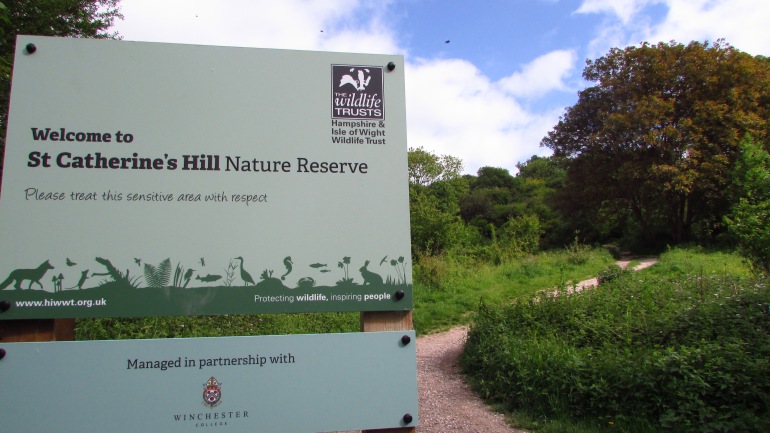 And damn, I finally got to see what all the fuss was about and I’ve got to say, I totally get it.

I reached a fork almost immediately, so I decided to try the steeper one (the left). 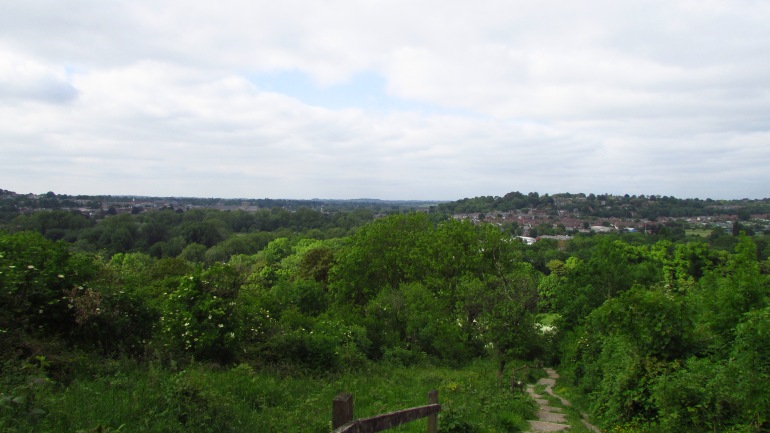 The way up was great, and at one point I stopped in the middle of the stairs, no other creatures in sight, and looked back only to realize I was already far above the town. It was a good metaphor I think. It’s good to stop and see how far you’ve come.

When the path trickled off, I just kept going uphill, covered by the trees until finally, I reached the top. 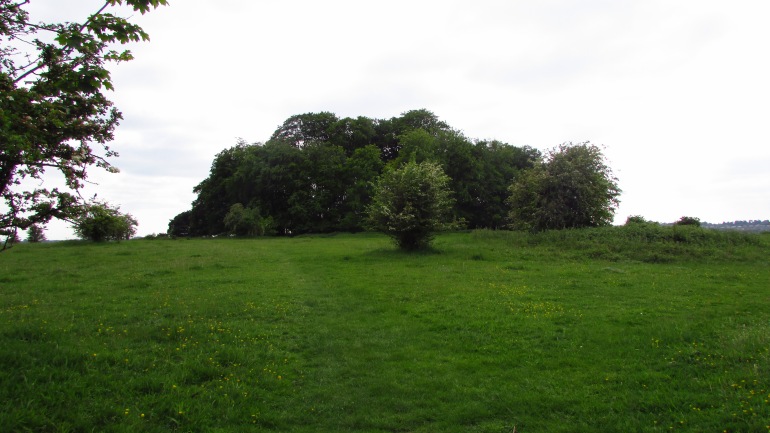 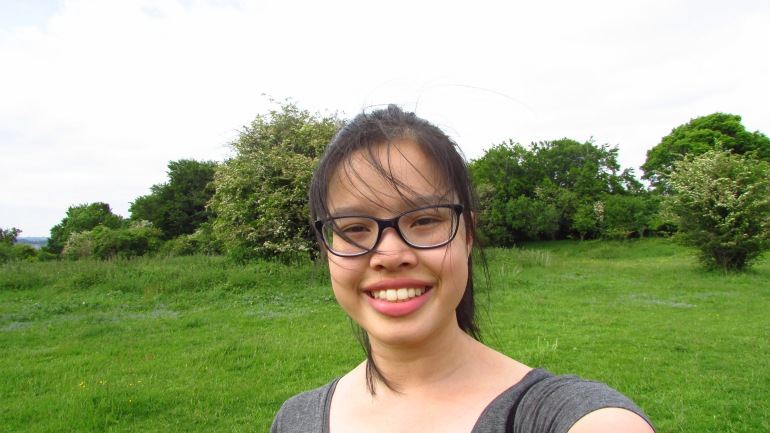 There’s a bunch of trees at the top, and some sort of maze? I didn’t really get it, even after I read the tourist sign that tried to make it more interesting with a ghost story. Not even a good ghost story, either. No suspense, no characterization, no conflict. But the view from the top was beautiful and the sun was out and I did it.

Obviously, I couldn’t go all that way and not go right into the tick of the trees. I wasn’t sure what I’d find. 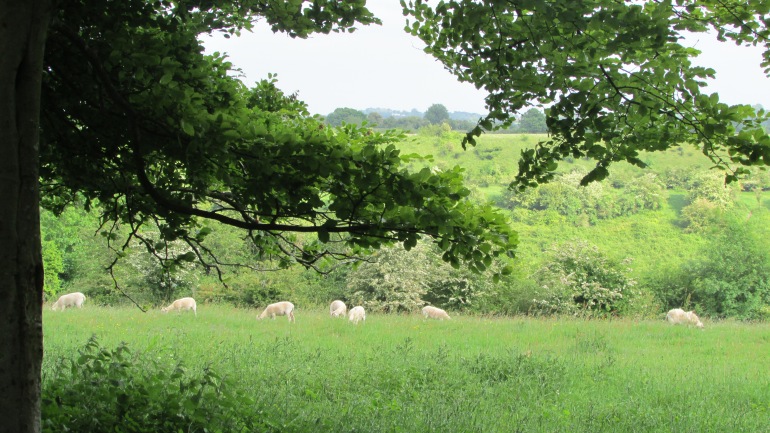 I found cows! A whole herd of them, with no fence or anything, just grazing on the hill. One of them was staring me down and there really wasn’t anything stopping it from coming at me if it wanted to, so I kept my distance. They were nice, though.

On the other side of the top of the hill, I could see more familiar landmarks. 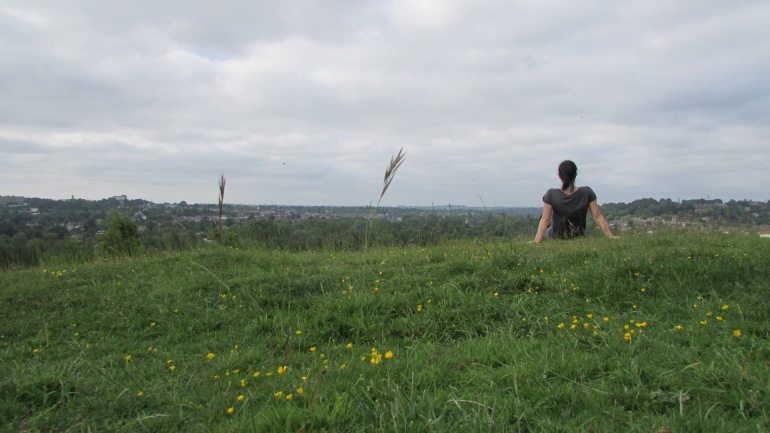 And so ends my time in Winchester, England. I’ve loved it here and I’m really going to miss it and all the people I’ve met and befriended. But also with the conquering of St. Catherine’s Hill, I’ve finished every challenge Winchester has offered me and there’s nothing left to keep me here. It’s time to move on, but I’ll remember this place always.

I didn’t get lost on the way back. Don’t worry, I’ve got this.

3 thoughts on “Winchester Day 4: The Hill”