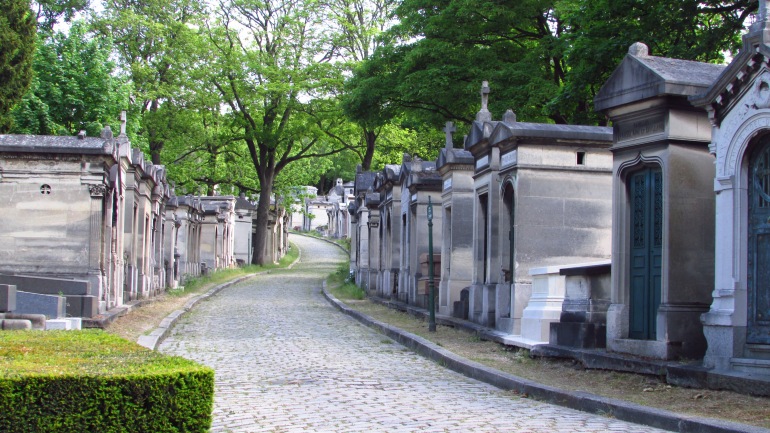 Today, I got shat on by a pigeon.

Here’s a picture if any of you are disgustingly curious.

Apparently having a fucking bird fucking poop on you is supposed to be lucky. It fucking better be.

*deep breath* Okay. Let me tell you about the day I just had. As I predicted in my last post, I woke up later than usual. I got ready, bandaged my feet where it was needed, put on my more comfortable shoes, and we were off. Our first destination of the day was Pierre La Chaise Cemetery.

This graveyard is big, old, and famous for being the resting place of a bunch of famous people. In all honesty, I’ve never heard of most of those people. The one Sarah and I hoped to see was Oscar Wilde’s.

On our way from the cemetery to the Metro station, the fucking bird took a shit and it landed on my leg as I was walking. Ew. I’m so glad I hadn’t worn tights because that would’ve been harder to wash. I gave the bird the bird and the people behind me looked really offended, probably thinking I was doing it to them. Then I had to endure the smell and stares on the metro and the walk back to the hostel where I stuck my foot in the shower with the sock still on, and turned it to full blast.

So there I was, half-in, half-out, shake-it-all-about, threw the wet sock directly into the garbage, washed the poop off my leg, and that’s what it’s all about. I cleaned my shoe in the sink and set it outside to dry, the whole time, never taking off my other shoe. So about half an hour later, Sarah asked, “Ivy, where’s your other shoe?” and I just said, “Outside” and she said, “Okay.” And then I sort of just sat there thinking, “Wow. That conversation actually just happened.”

Anyway, I changed shoes and we went off in search of something to do. We found a good place for shopping and even found one of those malls that are like streets with glass roofs! I think there are only thirty something of them left? but Sarah wasn’t really into that, so we kept going until we found a Metro station.

We took the Metro to Musée D’Orsay, which means…*drumroll*…our streak lives on! We’ve been going to a museum every day, for five days now.

Musée D’Orsay is actually in a building which used to be a train station. It’s got a giant clock and a beautiful ceiling and everything. And the art there was phenomenal.

I guess, when it comes to art, I have a type. In the Louvre, the art was amazing, but it was also a very specific Rennaissance type of art. There were the flatter pieces with gold and the more realistic renaissance paintings. Some where outlined so they looked a bit like cartoons, but they were still detailed to a tee and there was all the symbolism the artists put in, and their own version of photoshop and all that.

But at the D’Orsay Museum, there was realism and Renaissance-esque art, sure, but there was the more creative stuff, too. Most famous were Van Gogh’s works. It’s amazing how he used so many different colours and layers and the brushstrokes were so calculated, but effortless…yeah. It was amazing. 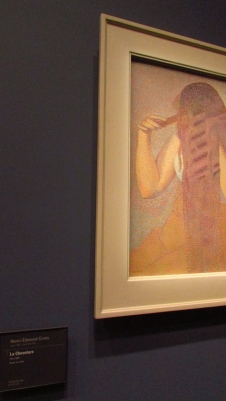 And there was a painting of this girl with brown hair, but her hair was purple with bits of blue and orange and it was made completely from tiny little dots. And there was this piece that I thought was a photograph from afar, but up close it was actually a bunch of scribbles and splotches and somehow they all came together in a picture the size of a postcard.

And there was this fancy cylinder desk which was open, so I had to crouch to see what the outside of the fold-out part looked like, and there was all this intricate metalwork that not many people would have seen because I’m probably one of the only people who would even think of getting on the museum floor for such a thing.

There was also this big round metal thing, kind of like a decorative shield or something, that had one of the coolest-looking portrayals of death on it.

After finishing the top floor, we took a break in the museum’s restaurant, which was a piece of art in itself! We stayed there a while until they closed, then we went around the first floor until it was about to close, then we looked in the gift shop until we couldn’t stand the crowds anymore.

We stopped to get a snack at one of the many restaurant/bars that was named after a character from The Hunchback of Notre Dame, and then, with crêpes in our hands, we went to a beautiful park behind the Notre Dame. I wrote while Sarah walked around a bit.

At 9pm, we went on a ghost tour and got to see the Eiffel Tower sparkle from afar and the exterminator shop which can be found in the movie Ratatouille while we listened to some cool stories.

By the time we got back, it was past 11pm and we were tired. I tried to start uploading the pictures right away because that always takes a long time, but by 2am WordPress was still being annoying and I was getting nowhere and only half this post was written and I was tired so that’s why this post is late. Sorry.