I managed to fit in some last minute souvenir shopping before we caught our train back to London. We took our heavy suitcases on the Metro, and at the station (Gare du Nord, same way we came) we got some snacks and I bought lipstick that made me look like an assassin (according to Sarah). Then, we went through security.

Because I’m not part of the EU, I had to fill out one of those annoying statement cards, so Sarah went ahead of me. I got a couple new stamps in my passport, and then lined up for security. Every single person ahead of me (about 5 people) would set off the metal detector, then complain about having to take off their belts and watches and empty their pockets and all the other basic security stuff. And then I realized as I stood in line for border security that I looked like a terrorist.

You remember the hat I bought not long ago?

Hard to see in that picture, but it’s basically a black fedora. I can’t easily pack it, so I had to wear it when travelling, including in security. And a slightly more recent purchase was this coat: 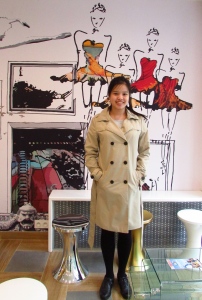 So right before my turn at security, I realized the reason why the guard kept looking at me funny was because I had the most suspicious motherfucking outfit on. I didn’t have time to take off the coat because it was my turn next, but after everyone ahead of me beeping and arguing, I went through without so much as a light turning on. The guard gave my hat an extra-suspicious look, and maybe suspected I was hiding plastic murder weapons (was it the assassination lipstick maybe?) but then Sarah and I followed the crowd out of his sight.

Then we took the Eurostar to London. I realized something while I was on the train for hours: I love travelling. Not just seeing new places, trying new things, but I also love the getting there part, whether it’s a taxi, coach, boat, train, or airplane. I love having hours for myself where I can read, write, nap, draw, watch videos…and there’s no internet to distract me. There’s no hurry, either, because I’m on my way no  matter what I’m doing.

I had a six-hour layover back in December and aside from the usual reading and writing, I also got my nails done at the airport and had some Tim’s. Travelling is like having time set aside from whatever busy life you lead just for you to catch your breath.

I’m staying with Sarah and her family until I leave for Canada on Saturday. They are lovely people and I feel so welcomed!