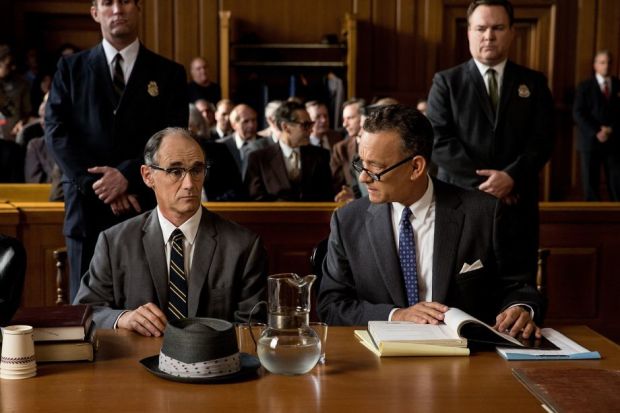 Ah, look. WordPress has just wished me a Happy Anniversary because I signed up with them one year ago. My counter is showing 1 hour to go before it’s been a year to the day this blog first went up. When I post this it’ll probably be up. But I’ll talk more about that another time.

It’s based on a true story. However loosely, I don’t know. There was very little to complain about (although if I were the type to nitpick(which I am) I would point out the lack of oxford commas) and will probably be seen amongst the nominees when Oscar season comes around, if only for the names Spielberg and Hanks.

In a way, this film achieved what many films should aspire to achieve. It made me forget I was watching a movie. Of course, with many films such as Crimson Peak or Mad Max: Fury Road, being reminded that it’s a movie with creative use of visuals and/or non-diabetic sound is what makes it better. With this, however, it wasn’t theatrical or overly flamboyant, it just told us the story in the simplest—and possibly best—way. It was filled to the brim with events and even though it’s no action movie, there’s no lack of suspense or high stakes.

Admirers of filmmaking, Cold War history, Hanks, Spielberg, non-fiction, or any combination of the above will appreciate this movie the most for what it is.