On Thursday November 28th, Storyhive announced which 40 web series pilots they’ve decided to fund. Mine was one of them.

If you need to catch up, I recommend reading my post, Pitching a Web Series.

I’ll be honest, I actually found out my pitch had been successful the day before it was announced. I got the call letting me know I was being awarded the funding and asking me to confirm a few things, and then I had a whole day to just be happy and proud of myself without anyone else knowing what I’d just achieved. It was nice. Then it got announced, and things started moving really fast.

The first thing to happen was I got a congratulations message from a friend. I went to see the announcement and congratulated friends who also won funding, then posted on all the Super Roommates social media* about being funded. Friends were congratulating me and it was kind of great.

Then I got the “what comes next” emails and some “hire me please” messages and I started to think about everything I needed to get done and—yikes. I thought the pitch was difficult? Actually making it happen is going to be ten times the work. The rest of Thursday I shook every time I thought about it. I would be responsible for the creation of a web series, I had to organize people and schedules and locations, I had to budget twenty thousand dollars—I’ve never been responsible for so much money my whole life.

That first day I was pretty anxious about what was coming, not gonna lie. The pressure was on, and I wanted to do a good job. But like I did when I first decided to pitch the web series a few months ago, I got together with some friends to talk.

Mark’s pitch hadn’t been picked up, but Ximena’s had, and the three of us met up and celebrated, and talked through everything that had happened and was about to happen. Eventually, our conversation turned to more normal things and it was just a cool hangout, and by the end of the night, I’d stopped shaking and my outlook was way better. I was prepared. Still scared, but ready to meet any challenges head on. So thank you, Mark and Ximena.

Over the weekend I also met up with some friends to do post-production on a super-short based on Super Roommates. One of them, Megan, also got her project funded! Anyway, a while back we thought, let’s get together and make something. So we did. It was cool to be hanging out with friends and being creative and making stuff for fun. Aren’t friends great?

Over the weekend I got reacquainted with my story and my characters (I sort of did my best to forget everything to do with it after pitching). I find myself feeling so lucky. I love these characters and am so glad I get to bring them to life and share them with others. I’m also in a position where I can give jobs to film industry people, at a time when the provincial government has introduced changes that are hurting our industry and times are tough for many. It’s not a lot of work, but it’s something, and that counts. I get to be part of the solution.

I’m now neck-deep in pre-production, trying to finalize a budget and put together a team. I may have done the pitch solo, but I won’t be going into production alone. Of course, to finalize a budget I have to check on things like how many people will I need and in what roles? And then I go and work on refining the script, which reminds me to get a location for the script, so I go off on a search for locations, but can’t actually book places or send inquiries until the schedule is set, so I go to my calendar to look at that and wonder how much time would be needed to edit afterwards? Then I email potential editors, but of course, I can’t actually offer solid work until the budget is set, but to do that I need to finish the script…

Tomorrow I start filming a student short film and I hope to have a few things settled before then to lend myself some peace of mind.

I took part in NaNoWriMo last month, and although I didn’t win, I did add a good 20k words to my novel (more on that here if you’re interested). But it was a busy month! I applied for a filmmaking mentorship (including completing another pitch for an entirely different project), was in another student short film, made a mini short based on Super Roommates with some friends (it’s almost done!), worked, got a second job, and finished it off with getting the Storyhive grant. So I’d say 20k words was pretty okay.

I’m being challenged, and that’s good. I’m being creative, and that’s also good. I’m feeling happy, and lucky, and ready to work. Actually, I should get back to work now. Hope you’re having a great day! 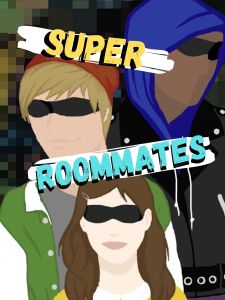 One thought on “Producing a Web Series”