I’ve been busy. So busy that the only thing that reminds me I don’t actually have a job is my back account. So I haven’t been posting. However, I was in a half-hour long short film which is finally out and I figured at the very least I could share it with you all.

So here is the short film I filmed at the beginning of March, Surreal.

I’d love to know what you think in the comments below! And shout out to the awesome cast and crew I got to work with! They were great and very successful in making me look good (even without makeup).

Filming this was a ton of fun and I was in Water Valley for four days for it. I think of those four days, three of them I went straight to bed as soon as we finished because it was some ungodly hour and I was exhausted.

I was pretty dirty by the end of it, I must admit. A lot of my costume were my own clothes which I was putting back on every day and I swear my grey jacket permanently smells like campfire smoke. Not that I mind.

Caleb Gordon played Russell and he and I were on our knees on ice for what felt like four hours for one of the scenes. It only hurt at first, then the ice just sort of numbed my knees.

Rob Jacobsen and Alana Fischer, who played Jamie and Whitney, actually act in another short film I was in this year! (This one.)

Between takes during the more difficult scenes, jokes were constantly being cracked. The juxtaposition was funny.

For the four days, I found myself taking on Mia a bit more than I had bargained for. I was quieter overall and sometimes between shots I didn’t even talk. Not because I was trying to keep in character between scenes or anything, I was just less talkative than usual. It was interesting. I can definitely understand actors losing themselves in characters that take months or years to prepare and film.

It was cold a lot. I was constantly battling a runny nose. The fire scenes were nicer to film. Except when smoke was getting into our eyes and sparks singed holes in our clothes. But it was warmer.

The crew I worked with consisted of Ximena and Mark, the directors, Gus and Devin working the cameras, and Kimberly the producer getting some background. Ximena’s parents, Randall and Gabriela, hosted us for the week and were awesome hosts.

Despite the cold and the character and some of the content, this shoot was so much fun.

Here are photos from behind the scenes, mostly taken by Kimberly, some by me. 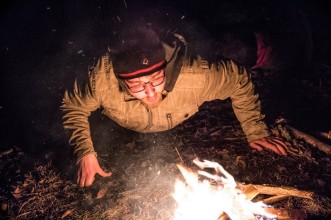 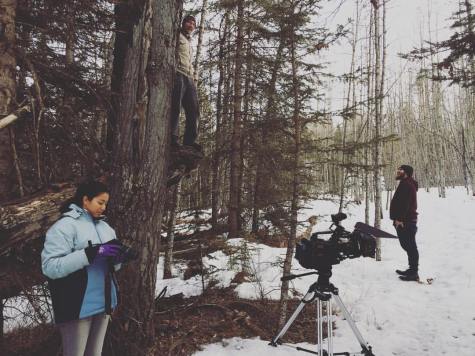 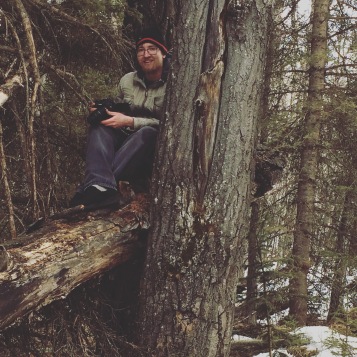 I live in Calgary, Canada where I was born and raised, but I lived in Winchester, England for three years while in university. When I was fourteen, I decided there weren’t enough books in the world and set out to make more. Since then, I’ve been writing non-stop and aim to work in the book industry. I have two blogs: PrecariousWriter.com is my personal blog where I'll write about anything. PrecariousReader.com is book and writing-related posts including reviews, poems, short stories and articles. View all posts by precariouswriter

One thought on “Surreal: Short Film”